Discriminatory job advertisements are still utterly common around the world. Here’s a compilation of ten job ads that should make you cringe and rethink your job postings.

Job advertisements that discriminate in terms of gender, ethnicity and socio-economic background are not a thing of the past. There are various instances where we (at times unintentionally) tend to hold onto biases and discriminate actively. This is especially true while sourcing and recruiting talent whether we are consciously aware of it or otherwise. While the recent Burger King “Women belong in the Kitchen” ad created a whopper of a controversy for the brand and Facebook definitely did not get a like for accusations of targeting ads to “ideal” talent pools, these conversations die down just as quckly as they come to the foreground and the status quo of collectively accepted gender discrimination and other biases is quickly restored.

Remember the gender-discrimination test when a scenario was narrated to you with a few key characters and your task was to come up with names for each of them or match them to a list of names already provided? The characters were usually a pilot, a teacher, a doctor, a nurse, a parent, and a flight attendant and of course, you weren't told at the outset that this was to test your gender bias. On an average, people chose male names for the doctor and the pilot and female names for the parent, the nurse and the flight attendant (the teacher usually had a more mixed response). Moreover, when selecting from a provided list of names, people had a tendency to match names and professions based on what the names “sounded like” and usually exhibited their often unconscious racial bias. What a great idea for an icebreaker session to make things astoundingly awkward right from the beginning of a two-day sensitivity training program!

Jokes aside, tests such as the one detailed above bring to light two things - that we are often unaware of our biases no matter how ingrained they are in our thought processes and that we regard them positively as something that is “right” or that “makes sense”. This is possibly the reasoning behind a lot of the ads that follow - where employers/recruiters genuinely believe that they’ve made the correct strategic decision in keeping their ads gender-specific and socio-economic -culture biased.

1. The truth behind “women thriving”

Yes, Japan does have laws in place that do not permit posting jobs with gender specifications. But who does that stop from being gender-discriminatory? Apparently not too many! There are multiple ads that try to bypass the gender-neutrality law by adding “women thriving” or “men thriving”. What this post directly translates to is: (Women thriving) General Affairs. Asked to perform a step-up task in the enviable Marunouchi area. Working for major corporations. Masked segregations such as these point towards the fact that we live in a world where some jobs are still considered “suitable” for a woman while some are not

2. Stick to what you know, women

Ads on a well-known job portal in Russia often go as far as to post a single job advertisement with clear specifications for men and women. It really does make you wonder what the HR thought while posting this. Or maybe, they didn’t think at all! The job roles are in keeping with socially dictated gender roles with women being encouraged to apply for jobs that do not require physical labour or even strategizing in a stressful environment.

Would you like being labeled as nothing more than a pretty face? Job ads such as the following one from Pakistan are unfortunately quite common where not only are “women preferred” but demands like “good-looking personality” and “attractive physique” are explicitly stated. Besides being gender-specific, such ads also bring in the added (not so subtle) note of objectifying women for client/customer-facing roles.

Some ads not only have distinctly different job descriptions for men and women despite the role being exactly the same, but are also exceptionally honest in stating that men are entitled to a 30% greater salary for the exact same job.

This goes deeper than believing that men are better at the same job and thus deserve to be paid more. Some employers often state that hiring women are a bigger gamble since they have “family responsibilities'' as if that somehow disqualifies them or that if they’re newly married, they would inconvenience the organization by going on maternity leave soon. As much as we would like to believe that these are exaggerated untruths, these happen to be actual arguments that employers provided for their hiring decisions.

These ads for a male chemist and a female receptionist, besides being a commentary on widely accepted gender roles, also bring in the added point of age where, as expected, the age cut-off for the “attractive” woman candidate is 28 years whereas that for the man is 35. Clearly to be adequately productive, an organization just happens to need younger, attractive women. Why blame the HR when they’re just trying to create a vibrant work environment by being repulsively discriminatory, right?

It’s not uncommon for organizations to list out an attractive array of perks and benefits that come with the job but the following ad from an events organizing firm from London takes it a notch further. They felt the need to specify (in bold font) the presence of a diverse group of young female junior developers as a perk. Why choose between being sexist or ageist when you can be both! 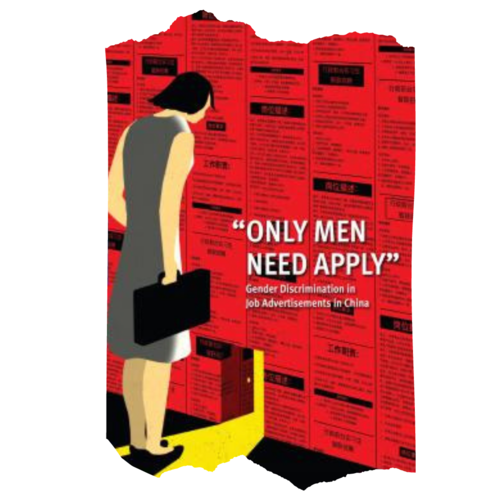 Some ads really do make you do a double-take and disbelieve your own eyes. Several of the largest tech companies in China were flagged by a Human Rights Watch Report highlighting that job ads in China regularly state that “only men need apply” for about 19% of the posts (2018). On the contrary, there are no jobs that specify “women only” unless the role description is steeped in sexist innuendo. Even more repugnant is the not so subtle requirement for job ads to be a beauty contest requiring women to have certain physical attributes — with respect to height, weight, voice, or facial appearance — that are completely irrelevant to the requirement of the job.

8. Massaging is a KPI (key Performance Index) too/ Massaging the male ego

This job post is as sad and unsettling as it is revealing of a prevalent culture that runs deep. Calling out to “physically presentable” women (also stating “She must be attractive”), the post goes on to state a list that leaves no skill-set out from modeling to dancing to product promotion to social media management and of course, to being able to “help the Boss relax” by a “professional sports massage”. That this ad was actually run and that it would have had enough applicants is the bitter truth that cannot be denied in our overtly shiny world of work where a lot of these issues are glossed over to make room for “bigger conversations” like work-life balance and productivity indices!

Our biased thought loops need to be broken at the chemical level. Job advertisements like the ones listed above often make the bias-free work environment seem like nothing more than an overly hopeful vision of utopia.

That actual functioning HR teams put out these ads is worrisome indeed. How can we function with these age-old stereotypes? Yes, stereotypes do help us make quicker decisions and function effectively. That said however, when stereotypes are laced with negative emotions, prejudices come into play. Biases and discriminatory behaviour are basically prejudices in action and this cognitive-affective-conative (thought-emotion-action) cycle is born.

To break the cycle, we must look deeper at the machinery that runs it. We are what we do repeatedly and by reinforcing discriminatory behaviour (or even by ignoring it) we allow biases to grow to the point where they become reflex actions.

With employer branding becoming an important tool for attracting top talent, employers need to understand the need to build a brand that encourages and reinforces a culture of diversity and inclusion - where, at every point of the employee life cycle, applicants, candidates and employees feel respected and valued as individuals.

Management and HR need to be held accountable for taking the right call and held accountable for publishing posts that are discriminatory. There is no set formula to reverse years of reinforced bias but it is never too late to start. Drafting and publicising your core company values, creating clear criteria for hiring and conducting training sessions where your own branded vocabulary is checked and internalized are all part of a good way to begin your journey towards being more conscious of recruitment biases and thus moving a step closer towards building a workplace that is truly inclusive.

Half the Sky's mission is to supply the tools that can give every woman the ability to build a successful career and be fully prepared for the future of work. So, that they can lead a healthy, prosperous and more balanced/blended lifestyle of their choosing.  By building your confidence, you’re setting foundations to empower yourself and your career.  The world is your oyster, and it starts with you.

Enjoyed this article let us know your thoughts in the comments below:

half the sky (HTS) is a career platform for women connecting you to career opportunities at companies that care. Providing you with information, tips and strategies to navigate the rapidly changing workplace.