We curated the Women in Technology Interview Series to gain insights from some of the most successful female leaders in APAC who have scaled to the top of their profession. The series addresses work place issues that affect all professionals, and hones in on the unique challenges women encounter. 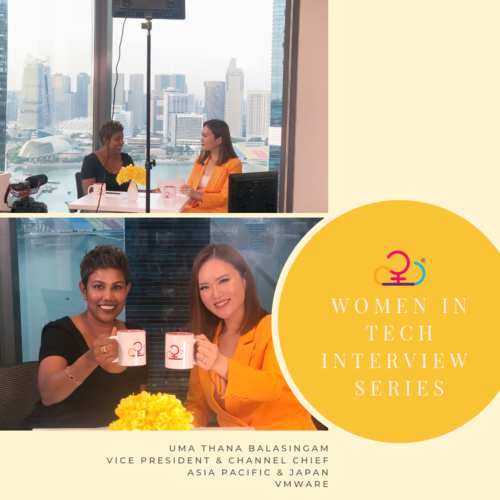 Uma Thana is no stranger to a lot of female professionals in Singapore, being the Co-Founder of Lean In Singapore and also Vice President & Channel Chief, Asia Pacific & Japan at VMware. Uma has close to 20 years of experience in the technology sector. She has worked with some of the world’s leading technology companies and was recognized in May 2018 in CRN’s The Most Powerful Women of the Channel global list.

Part I of the interview:

SABRINA: So Uma, can you tell us more about what was your childhood like.

UMA: Well I grew up in J.B., so across the border in Malaysia, although I was born here in Singapore. And actually the year that I was born my father had a heart attack. So my mother became the sole breadwinner. So what I watched her do in my childhood was to raise two girls on a salary of one thousand two hundred ringgit and saw my father take on household responsibilities. nd you know there was never any conversation about what I could or couldn't do.

SABRINA: So how did you become passionate about this subject because that's your fifth choice?

UMA: So I got my first Acer computer at home complete with dial up Internet access when I was about 17. And I would spend hours on it but it was 90 percent about games. And so I even stayed up late at night, didn't sleep just to play games online. And so I figured you know I'm spending so much time at the computer, like, "How hard could computers be?" Not truly understanding what that field actually meant. Hence why I randomly put down computer science.

SABRINA: That said,  that kind of changed your life in that sense because you're forging a great career out of it as well.

UMA: Yeah I definitely did. So I think, I mean the one lesson from that is, I guess you never know till you try.

SABRINA: So Uma, what motivates you as a leader?

UMA: The first thing for me is building a team. That is probably my source of energy. So finding talent and then seeing how they progress. It's certainly a big motivational factor for me as a leader. And second, throughout my career I've just watched what other managers and leaders do. And I have a set of things where I want to model after and certainly a set of things that I do not want to model after. And so being in a leadership position allows me to mould into doing what I think is the right thing to do for people. And so that's what inspires me.

SABRINA: And Uma, what are the main challenges you face as a female leader?

UMA: The first two biases is your age and your gender. Because I was given all these opportunities to present to customers, etc. That time this concept of storage area network, it just came out and that was what I was tasked to be an expert on and so I ended up doing a lot of presentations. You can just see when you stand up in the room and you know all the customers in the room are like double in your age, perhaps. And they're double clicking, right? This is the mental shortcuts that we rely on that we call unconscious bias. And they're going "Well, does she really know what she's talking about?" And if I showed up at a customer site with a tool box and I'm about to touch their half a million dollar investment of IBM equipment to install something, you can just see people are a bit hesitant. They go "Are you sure you came here alone?"

I think today, the two big ones that I noticed for myself as a female leader is first walking the tightrope, so balancing between seen as too feminine, or you speak too softly, your body language is a certain way. Maybe you have a lot of "Uh"s and "Maybe"s and "I'm not sure"s to being seen as too masculine where maybe you are voicing a very strong opinion on something and you might be perceived as arrogant and ambitious.  However, if a man says the same thing he is perceived to be strong and confident.

And the second one is what we call Prove-it-Again and this manifests in so many different ways in the workplace. But this bias speaks to the fact that research shows that

women are more often than not promoted based on performance, but men on potential. And so one of the ways it shows up in the workplace that I think every woman can identify with is the stolen idea. So you might say something in a meeting. Sometimes the meeting goes on as if you didn't see anything at all. And then a man says exactly the same thing a few minutes later and everyone goes" Great idea, David."

SABRINA: And Uma you're in the technology sector for close to 20 years and we all know it's a male dominated industry. So did you face a lot of discrimination when you were rising up in your career?

UMA: I'm gonna say yes and no. So until I read the book Lean In which was written by Sheryl Sandberg in 2013, I actually didn't know I was going through those biases and when I read the book. A couple of things came to mind, you know. And the first thing was an "Aha" moment like, you know, "it wasn't me". You know there is an explanation. The set of things that happen when I talked about presenting to customers that are double in your age and they're questioning your credibility and your experience. But at the same time I have to say my career has been supported by a lot of what I call He For Shes and they are all men who I consider role models. And these are men who saw me somehow and thought I had potential and wasn't judging me on performance. And they were willing to advocate and sponsor.

SABRINA: The importance of being an authetic Leader.

UMA: I always believe that you should be authentic. I certainly made the mistake in my 30s to over rotate, to try to act and talk and behave like a man. So, being too masculine. And the reason I did that was because when you think about leadership and you think about all of the adjectives that people might think in their minds, you know, being ambitious and aggressive and confident. Those are all what I call male advantaging terms, right?

But there is no research that shows that being compassionate and having empathy and caring is doesn't make equally good leaders, right? And so I learned from that mistake. But firstly I need to figure out who I am. I mean, I grew up with very low self-confidence as a child because I'm a dark skinned woman and I grew up in a country that likened beauty to fairness. And so that that was the first battle.  And then I had really terrible teeth.

They are right now thanks to the braces I had to wear when I was 12, 13 for like two and a half years. And then my self-confidence just plummeted even more. And I wasn't the skinniest. So I just struggle with with all those. And I didn't really find myself till my 30s. And so I think authenticity, which I think is the more important thing versus showing your weaknesses. I don't know if anybody has weaknesses. I think you know you're who you are. And hopefully you get to work for a company, which I am fortunate to have, that allows you to come to work as you are.

And I think there are situations where you do have to practice the gender judo. Perhaps in a leadership meeting, you know, there are things and behaviours that you have to emulate and perhaps some of the... what you might call weaknesses perhaps should not be in that type of forum. But certainly I think as long as you're true to yourself and people can just say OK, you know, I'm having a genuine conversation with a human being.

SABRINA: And what would you mind telling us more about the gender judo? That you just mentioned.

UMA: So gender judo is when, in order to walk the tightrope where women, especially women leaders, are perceived to be too feminine or too masculine. One of the things that we talk about at Lean In Singapore to do that is the gender judo where, for example, and every woman is different. So she needs to choose what's the gender judo she uses. For me, for example, 80 to 90 percent of the time I'm going to be nice and caring and kind which is all of the attributes you expect from a woman.

So that 5 to 10 percent of the time, if I need to exercise being too masculine when I want to get a really strong opinion across I'm not going to get penalized for it. And I know when I talk about this some women might disagree. You know, like "We should always voice our opinion", right? "We have a right to do so". And I've never found myself in a situation when I think it's worse to double click that.

You know, first you got to be authentic. But it's worth to double click because I think sometimes the penalty is done in silence and you may not pick that up. And the other comment I get is "Well, I don't see how that affects gender equality". So it's not just about one thing that's happening to women in the workplace, it's not just one idea was stolen in a meeting. It's the accumulation of many different types of biases that are imposed on women that is happening throughout her career, that is impacting her journey. If she wants to get to the top, whatever the top means to her.

Sign up to find better jobs, get career tips and job alerts directly to your inbox!

Top 20 Interview Questions & Answers You Will Need To Know.

Join us to diversify your team!